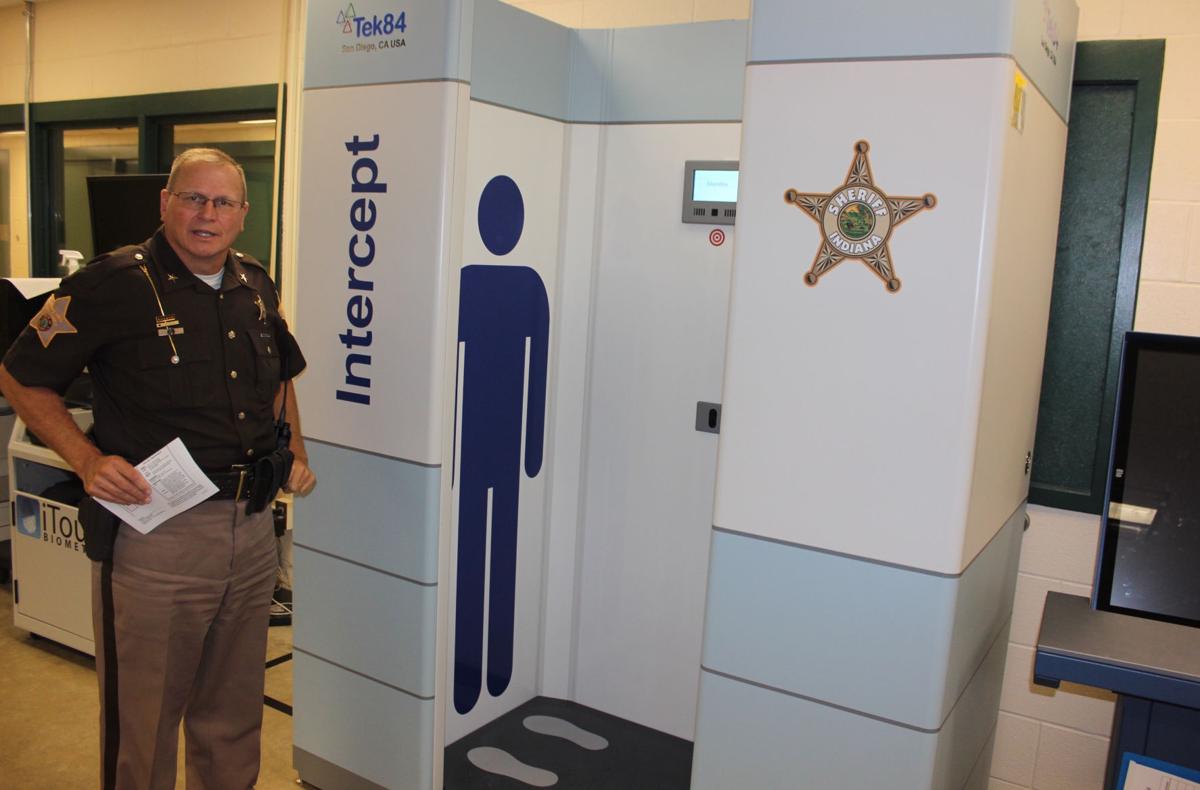 ALBION — In this instance, at least, the coronavirus pandemic became an opportunity.

Similar to a full-body X-ray, smuggled contraband such as weapons or illegal narcotics are easily detected by the machine, even if items are placed into bodily orifices which otherwise might make detection difficult. The image of the scan appears on a large monitor, and brightness and contrast can be adjusted for each scan to make detection more easily.

With a relatively small footprint, inmates simply step into the machine where they remain completely visible to jail staff.

“We were having so many issues with people smuggling drugs into the institution,” Noble County Sheriff Max Weber said.

Weber started investigating getting a body scanner earlier this year after a case where a woman allegedly smuggled a large amount of meth into the jail and then was distributing it to other inmates before corrections officers caught it and confiscated the drugs.

Normal officer and confinement officer pat downs were missing some contraband, and the slightest amount of illegal drugs could have a devastating effect on the jail population.

The full body scanner wasn’t the first avenue Weber explored to halt the smuggling. He tried issuing disposable under garments so people could not sneak contraband in with their clothing.

“They were still missing some things,” Weber said.

It was important to the safety of facility that something further be done.

Then along came COVID-19 and the federal CARES Act. The purchase of such full body scanners qualified since it allows for more thorough searching of those being booked into the jail without physically having to touch them, limiting confinement officer exposure to contact with people who may have the coronavirus.

The Intercept model manufactured by Tek84 had everything Weber was looking for in a scanner. Some models require the inmates to be on a moving conveyor belt, but the Intercept model does not. Some scanners take seven to 15 seconds to complete the scan, while the Intercept does its work in four seconds.

According to company literature, “unlike the units used in airports, these scanners use a low-level of x-rays transmitted through the body.”

Weber said a person can be safely scanned 200 times per year without risking their health.

“Allen County has two of them,” Weber said. “I went down there to see them.”

Weber liked what he saw, and with the CARES Act, managed to bring the $144,000 piece of technology into his department for $5,000, which includes a warranty that extended protection from one year to two.

With the recent move by the state legislature to allow inmates sentenced on a Level 6 felony charge to serve their time in county jails rather than with the Indiana Department of Corrections, some inmates are now staying longer at the Noble County Jail.

And some of them have substance abuse problems and addictions which don’t go away just because they are incarcerated.

“You’re dealing with the criminal element,” Weber said. “They have to get their fix somehow so they try to sneak it in.”

LaGrange County has installed an identical scanner at its jail. Whitley County also has an Intercept model which is operational.