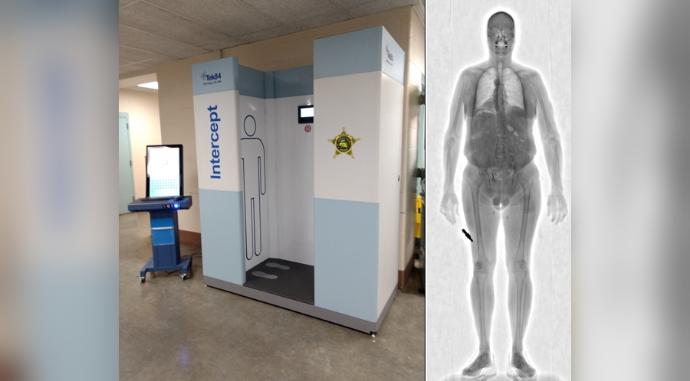 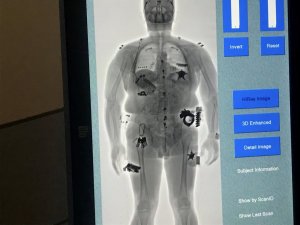 CHILLICOTHE –  The Ross County Jail has undergone improvements in the past year to make inmates safer during the course of the pandemic, but also to make the jail more secure.

Two items of note are a new body scanning device, and a Skytron Ultraviolet disinfection system.

When an inmate comes through the sally port, gets patted down and booked in, one of the first things they do is submit to a body scan.

The scanning device first takes a photo of the inmate, which can be attached to their scan, but also registers their temperature.

“They come with a more potentially accurate thermometer reading and compare, make sure there isn’t a difference,” he said. “If they still show a super high temperature, we keep them isolated from any other inmate — even all the way to the point of court, if we have video court. They’ll go in by themselves, and we’ll tell the judge, hey, this person is presenting.”

Recently, the Ross County Sheriff’s Office acquired some rapid tests from the health department. While the rapid tests are slightly less accurate than others, it still gives officers a good basis to go by if an inmate were to test positive.

“Even if you come back negative, we’re still not integrating you with the rest of the population, and we can give you more testing depending on how long you stay,” White said.

While it provides one line of defense against COVID and other contagious illness, it also serves a more important function — allowing deputies to see an x-ray image of a suspect which clearly shows any suspicious items on their person or inside them, be it a gun, knife, baggie of drugs, or anything else considered contraband.

If contraband is found, and they choose not to or are unable to surrender the item, the inmates are taken to a “dry cell” without restroom facilities, where deputies are able to retrieve items if they are passed. If it continues on, the jail will call Adena to help remove the offending item. “If this happens to get lodged, that could be a medical issue as well,’ said White.

Sheriff George Lavender brought up the example of a potential overdose if a swallowed baggie of drugs were to bust open inside an inmate.

“Before, if you suspected something, you had to put them in a dry cell, and you’d have overdoses in your jail – this helps cut down on that,” said the sheriff.

The roughly $150,000 machine, paid for out of inmate funds that the sheriff’s office can access to buy things for inmates, was purchased in mid-2020, said White.

Another big improvement is the use of a Skytron UVC disinfection robot, which utilizes ultraviolet light to kill even the toughest germs in hard-to-reach cracks.

“You put them in a room, plug them in, it senses all around the room and the size it is, kicks on a UV light that will decontaminate the room,” said White. “It’s supposed to be effective for COVID but it also kills Mersa and several other things and we utilize it to be able to disinfect certain areas and keep everything down.”

It is mainly used in the reception/booking area and the jail courtroom where prisoners have to gather.

The roughly $50,000 machine was purchased through money from the CARES act through the Ross County Commissioners.

Also beneficial to the jail’s fight to reduce infection is an air scrubbing system that was purchased long before the pandemic, said Lavender.

Along with high-tech measures to fight the disease, the Ross County Jail is constantly being cleaned by inmates and corrections officers, using electrostatic sprayers and traditional soap and water, 24/7 inside the jail and in the rest of the building during business hours.

Along with the fight against coronavirus, the sheriff’s office is also making strides to make it more difficult for inmates to escape or get contraband through the walls.

For example, the sheriff hopes to add metal sheeting to the interior of the cell walls facing the outside of the prison, preventing prisoners from digging out the concrete block in an attempt to escape, as a group of four inmates successfully managed to do in February.

With the need in mind, construction crews are already lining the under-construction area, which will include a new infirmary and a gym space, with metal.

“The new construction in jails sets the standard for rebar every 8 inches,” said Lavender. “What our plan called for back in the ’80s was 16 inches. Every time we catch them digging out, we’ve never once found Rebar where they’re digging at.”

Lavender said the sheriff’s office has stopped multiple attempts to dig out before the successful effort last month.

Inmates have gotten more desperate to try to dig out, he said, as recently gratings were applied to windows on the exterior of the jail to stop prisoners from putting out “fishing lines” after using “wick” – toilet paper rolled tightly and lit to melt a hole in the glass/plastic composite window.

White said that while the pandemic has slowed his efforts to make improvements to the jail, he still has plans in the future.

“I came right at the beginning of 2020, I barely had time to get my feet wet before we got hit with a pandemic no one has ever heard of,” he said. “That has taken a major turn for a lot of the changes we want to see take place and a lot of the good we want to do, but we’re hoping that with the vaccine and things going on, we slow the cycle down and focus back where we need to be, and get some improvements taken care of here.”