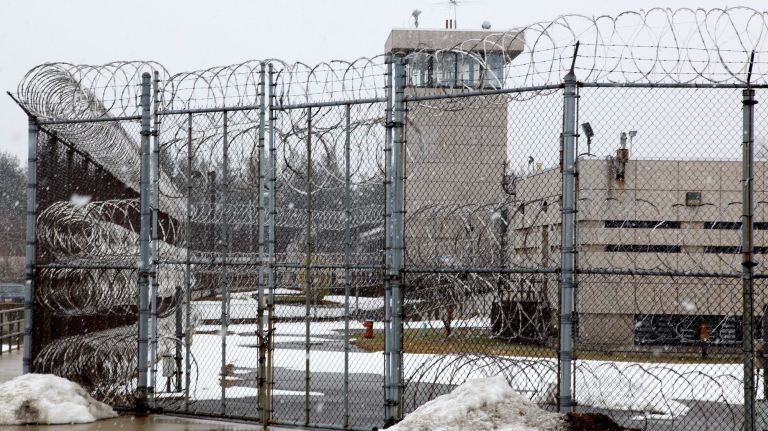 Inmates at the Nassau County jail have tapped into illicit supplies of narcotics and other drug contraband more than two hundred times in recent years, a Newsday analysis of state records shows.

Newsday reviewed data from hundreds of reports on drug contraband seizures at Nassau’s jail that are kept on file at the New York State Commission of Correction after obtaining the records through the Freedom of Information Law. The data covered a 45-month period from 2016 through summer 2019.

“It’s just a part of doing business with locked-up people,” said Steve J. Martin, a lawyer who is a federal court-appointed monitor of New York City’s Rikers Island jails to oversee reform on use of force. “It is a very significant, ever-present problem because it’s related oftentimes to violence.”

Martin held the same oversight role at Nassau’s jail after the 1999 fatal beating of a prisoner by correction officers.

The statistics are difficult to put into context without knowing how aggressive jail officials have been about doing facility-wide searches for such contraband, he said.

“I think there’s a very serious drug contraband problem in this jail and that more measures need to be taken to root it out,” he said.

The more than 230 drug contraband confiscations “tells me what we got. … What are they getting past us?” Sullivan added.

Two years ago, West Babylon man Kevin Rollins died in Nassau jail custody — a fatality that the inmate’s mother, and attorney James Pascarella — whose law firm represents her — said was caused by a fentanyl overdose behind bars.

The state Commission of Correction has been investigating Rollins’ death on Dec. 28, 2018.

In 2019, his mother, Susan Rollins, filed a notice of claim — a precursor to a lawsuit — against Nassau County, the jail, the sheriff’s department and other defendants.

“They know about drugs being in the jail. … They know because it’s been an ongoing problem,” Susan Rollins, 60, a paralegal, said in an interview. “All I want for Kevin is justice … so that no other family has to go through this.“

From 2013 until early 2020, there were at least 16 drug overdose deaths in the state’s jail population, according to Commission of Correction spokeswoman Janine Kava.

There were no confirmed overdose deaths in Nassau jail custody from 2013 through 2020, although that data doesn’t include Rollins’ death, since that probe remains open, along with some other inmate fatality investigations, she said.

Sheriff James Dzurenda, an appointee of Nassau County Executive Laura Curran and whose department operates the jail, released a statement Wednesday on the drug contraband seizure statistics after a Newsday inquiry.

“All members of the Department are constantly on the alert to detect, identify and prevent the introduction of contraband into the facility at all times,” the statement said.

“We employ a number of different strategies in this ongoing effort which include the use of specially trained canines, various random and targeted search procedures, and other technologies designed specifically to detect contraband in the jail environment,” Dzurenda said in the statement.

County spokeswoman Vicki DiStefano said Curran’s administration wouldn’t comment on the Rollins case, saying “as per the county attorney, we are unable to comment on pending or current litigation.”

In November, Nassau lawmakers approved a $278,000 contract for technology that Dzurenda had said a month earlier would be used to target contraband.

“We are introducing body scanners that will be better able to prevent smuggling of weapons and drugs into our facility,” Dzurenda, who became sheriff in March, told legislators at a budget hearing.

The Tek84 Intercept Scanners transmit a low level of X-rays through a person’s body to provide a high-resolution image that can show the location of any hidden contraband after someone enters the machine and stands still for four seconds, according to the equipment’s manufacturer.

County records indicate the two machines are being funded with asset forfeiture money — funds generated when authorities seize assets believed to be related to criminal activity.

Sullivan expects the technology to arrive at the jail in January. The use of the equipment comes after emergencies at the jail in mid-November when, the union leader said, two male inmates had to be revived with Narcan after both overdosed on drugs in the same jail dorm on the same day.

Sullivan described the body scanners as “a good tool,” and said Dzurenda has been better than the previous two sheriffs about implementing searches.

But Sullivan said major flaws in the battle against smuggling persist. He pointed to contraband busts involving jail nurses in recent years.

The union official also alleged there is no supervision by uniformed officers of food preparation in the jail’s kitchens or of deliveries of foodstuffs and other items at the facility’s loading docks.

“There’s no security staff. They don’t open up the stuff and go through it as things are coming in. They don’t do random searches … It’s absurd,” he said.

But Dzurenda responded in a separate statement by saying the jail’s food services staff have special training and monitor the kitchens, food and supply deliveries and inmate workers in the food service unit areas.

“There has not been any direct evidence that contraband is introduced through the kitchen as opposed to other areas such as visiting, mail/packages, or smuggled by persons arrested/remanded to custody with contraband secreted in their bodies,” the sheriff added.

Inmates who are booked into the jail go through a metal detector and those being held on felony charges also undergo strip searches, according to officials familiar with the procedure.

Such searches aren’t routinely done on inmates being booked on misdemeanors.

That follows a class action lawsuit a Manhattan attorney filed decades ago on behalf of people who had been booked into the jail — litigation the county lost in a federal appeals court. The U.S. Supreme Court then declined to consider the case in 2016 after a request from the county, records show.

The ruling found Nassau had violated the rights of inmates charged with nonviolent, non-drug-related misdemeanors by strip searching them.

Visitors to Nassau’s jail are subject to search at any time and will face arrest if found with any contraband, according to the facility’s website. It also warns that drug-detecting dogs patrol the grounds.

State records show that within 24 hours of a drug contraband discovery, jail officials must report details to the state commission, including whether the drugs were introduced by an inmate, a visitor, jail personnel or an unknown source.

Drug contraband includes not only illegal substances, but tobacco and related products such as matches, lighters, rolling papers and over-the-counter drugs.

The state records on contraband — data the commission retains for three years — show marijuana and Suboxone are among the most frequently confiscated drugs inside Nassau’s jail. Doctors prescribe the latter drug, which contains an opioid, in pill or strip form to treat addiction to heroin and other opioids.

From the start of 2016 through summer 2019, jail officials reported 70 seizures of marijuana or suspected marijuana in about 45 months.

There were also 16 seizures of K2 — synthetic marijuana — or suspected K2 and another 45 incidents in which officials initially classified contraband they recovered as leafy substances of varying colors that weren’t identified further in reports.

In that same time, records show 96 total seizures of prescription or unknown pills, including the recovery of morphine, methadone, Xanax and Valium. Forty recoveries of Suboxone and eight recoveries of oxycodone pills also were among those eight dozen contraband seizures.

In many cases, officials seized multiple types of drug contraband in each of the more than 230 incidents.

The state data shows 64% of the drug contraband busts in the roughly four-year time frame involved inmate-introduced items, 29% were connected to visitors and 7% came from sources classified as unknown.

The records describe how the drugs were found, including a 2016 search of one cell that yielded 40 oxycodone pills and marijuana concealed in a colostomy bag.

In a 2017 incident, correction officers found eight bags of what was believed to be heroin hidden in a sock and two needles with syringes in an inmate’s walker after he acted suspiciously in a medical housing unit.

Other inmates hid contraband in a Bible, in a ceiling air vent, under a mattress, in an asthma pump, in balloons in their underwear or inside a body cavity.

Some of the busts involving drugs at the jail in recent years involved not only inmates, but visitors and medical personnel.

In 2017, a nurse who had worked for ex-jail medical vendor Armor Correctional Health Services pleaded guilty to a misdemeanor promoting prison contraband charge while admitting to bringing in cigarettes.

In 2018, another jail nurse pleaded guilty to official misconduct after authorities accused her of starting a relationship with an inmate and smuggling marijuana to him.

That same year, Nassau prosecutors said five people faced charges after a probe dubbed “Operation United Front” led to the seizure of heroin, Suboxone, marijuana and K2 after the disruption of schemes in which inmates cooperated with outsiders to try to get drugs inside the jail through visits or by mail.

The probe followed a Valley Stream woman’s 2017 guilty plea to promoting prison contraband after she admitted a role in a scheme to smuggle cocaine, heroin and fentanyl into the jail.

Kyle Ruggeri, 32, an addiction recovery advocate who founded the website Soberdogs.com and is on parole after time in a Rochester jail and a burglary sentence in state prison, said being behind bars in New York showed him drugs are readily available.

From 2016 through summer 2019, there were 237 drug contraband confiscations. Many seizures included multiple substances. Here’s some of what was found: 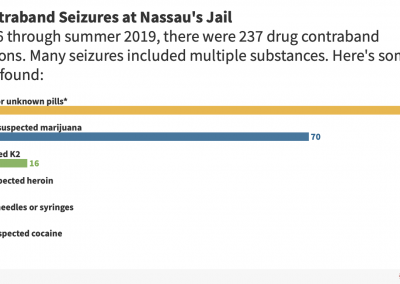 From 2016 through summer 2019, there were 237 drug contraband confiscations. Many seizures included multiple substances. Here’s some of what was found. 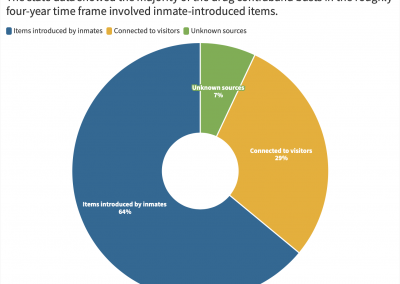 How contraband gets into the jail

The state data showed the majority of the drug contraband busts in the roughly four-year time frame involved inmate-introduced items. 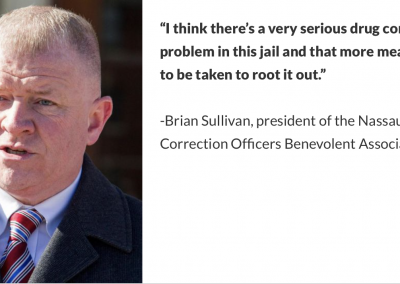 “I think there’s a very serious drug contraband problem in this jail and that more measures need to be taken to root it out.” 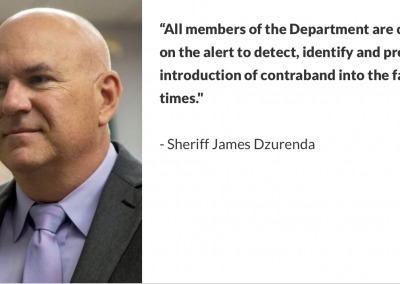 “All members of the Department are constantly on the alert to detect, identify and prevent the introduction of contraband into the facility at all times.”